At ETEREshop we are in love with large custom orders for participants of different festivals and parades. Since 2016, we have been making costumes for teams at the major Mummers Parade in Philadelphia and they have won prizes.

The history of the festival

It is out of the question – the Mummers Parade is a major parade in Philadelphia that dates back to the mid-17th century. It combines European and African culture heritage. The first European colonists introduced the custom of visiting neighbors on the second day of Christmas. After that, this tradition was extended until the New Year, when fancy-dress celebrations marched around the city.

During the festival, mummer clubs compete with each other, which unite residents of specific areas. The prize is money to offset the cost of costumes and accessories. A typical mummer is a male proletariat, but recently people from other social layers and professions have also taken part in the famous parade.

2016: Two orders for the festival at once

In 2016, we received two large orders for Mirror Man costumes at once. We have been producing them since 2012 and for these orders we have modernized the production technology. The mirrored tiles are attached to the breathable fabric, and the suits have a removable, washable lining for convinience.

Mirrored suits are not made from real pieces of mirrors, but from acrylic counterparts. Acrylic mirror is stronger than glass, shock and UV resistant. Moreover, the acrylic material does not age like a regular mirror.

We cut each tile with a laser. Thanks to our technology, you can choose any size, shape and color of mirror tiles.

Detailed information about our suits can be found here:

In 2016, we manages to made two orders at once for the Mummers Parade members: South Philly Vikings and the Fralinger String Band. The fact that these are orders for a major festival in Philadelphia did not immediately become well-known. Clients thshared the video from the festival only after the festival itself.

We received an order for 8 mirrored suits from South Philly Vikings and the same amount from the Fralinger String Band. We immediately got to work.

It took us about a month to produce one batch of suits. By the way, the South Philly Vikings wearing our Mirror Man took first place in that parade. Thanks to these guys, we learned that in our costumes you can not only walk, but also dance cool.

The Fralinger String Band team has tailored our costumes to their needs. In the photos of the parade, we saw trumpeters in Miror Man costumes. The guys made cutouts for the mouths so that the musicians could play. In addition, specially for this team, we made mirrored beards for our Mirror man.

This is how our collaboration with the Mummers Parade teams began in 2016 and orders for some of our most popular products happened.

The 2017 festival was a success for the South Philly Vikings, and in spring they contacted us for a large order of LED suits. The guys sent us their sketches and drawings. To begin with, we agreed to make one of the five types of costumes and sent them back for approval.

It was a custom order. The customer indicated that the team adheres to the nautical theme, so each costume had to be made in a specific color. “Not a problem,” we answered, and got to work.

We worked according to the customer’s sketches and installed LEDs of a specific color scheme on each of the costumes. All of them played on the marine theme. The costume was based on LED fans and skirts.

In addition, we were asked if we could make huge peacock tails. Again, the answer was yes. These were our first peacock tails, which later became a hit.

For a client, we made a product with a coral pattern. Everything worked out the first time. Moreover, the design and production technology of our tailings has remained virtually unchanged since that time.

It took us a long time to manufacture the costumes. Our workshop was not as big then as it is now, so we spent a lot of time soldering LEDs and sewing costumes. In addition, we haven’t had any experience with costumes for such festivals yet. These were our first steps, but they worked. In 2018, South Philly Vikings came second and won prise.

2018: LED suits and mesh on the raincoat

In 2018, we partnered with South Philly Vikings again. This time they sent in a custom order for 5 LED suits. The guys had their own sketch, we agreed on the materials and began to make costumes.

They were made of EVA foam, which was fastened together with regilin (rigid synthetic tape). We glued the LED strip onto the foam, pre-recorded the necessary effects, and as a result, they switched synchronously during the performance. See how impressive it turned out to look:

But that was not all, we had one more task. One of the team members had a raincoat. Our task was to make a grid of LEDs. It was supposed to display effects and text. We coped up with the task: we soldered the mesh, checked it and sent it to the client.

In 2019, the guys from the Fralinger String Band team contacted us. They saw our costumes at the Avantgardista exhibition, were inspired by them and asked to make similar ones for their team.

We made a vest consisting of LED strips and fastened with regilin. In the center the customer asked to install several large LEDs, for us this was not a problem. Four suits went to conquer the Mummers Parade.

2021st year. The order, which we keep in secret for now

We’re back in the ranks and now working again on a suit for the South Philly Vikings. We will not reveal all the secrets, but we have already agreed on the sketch, outlined the budget and are working on the creation of the costume. We are sure it will be a bomb, which we will definitely tell you about.

Collection 2022 – results of the year 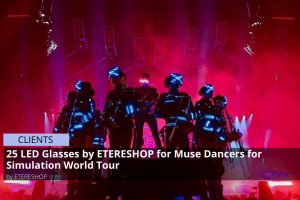 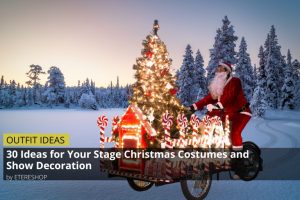 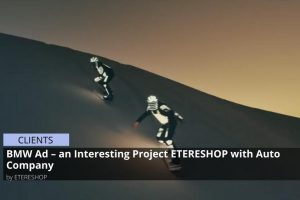 LED cosplay Samurai costume by ETERESHOP - the way we made it 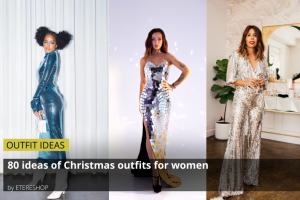 80 ideas of Christmas outfits for women - by ETERESHOP 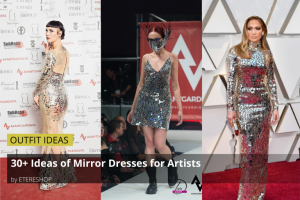 30+ Ideas of Mirror Dresses for Artists by ETERESHOP 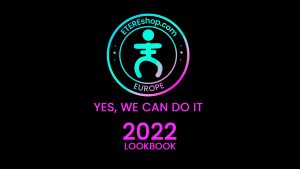